Castello Lanzun - Headquarters of the Order 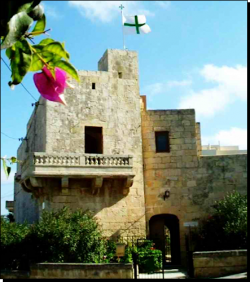 Torri Ta Lanzun (Castello Lanzun or Castle of the Lance) is located at Mensija, San Gwann (Malta), opposite the parish church. The building, formerly a fortress against the buccaneers, is owned by the Order and under the care of the Grand Commandery of the Castello. Largely destroyed during the Second World War, its purchase and restoration was made possible by the generosity of the late Lt Col Robert Gayre of Gayre and Nigg, Laird of Lochore. Additional funds were raised by means of a special Commemorative Medal, issued in 1973 on the occasion of the opening of the headquarters.

The Torri consists of a main building, the tower with the Order's chapel (flag pole on top) and a large inner yard with flowers and a commemorative plaque. The rooms upstairs house the archives of the Order. The former stables have been converted into a large meeting hall (Knights' Hall). All rooms are decorated with a large number of arms, pictures and photos. Castello Lanzun is regularly used by both Jurisdictions located at Malta.

The Torri was formally opened by the 48th Grand Master, HE Don Francisco de Borbón y Escasany, in 1973 as the official headquarters of the Grand Master.  The Grand Master is also the Grand Commander of the Castello.