The origins of the Order 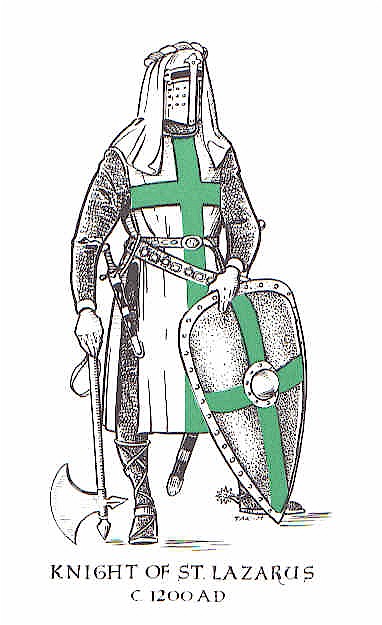 The Order of Saint Lazarus has its origins in the Holy Land before the First Crusade of 1099. Its original scope in Jerusalem was to aid lepers within the Kingdom of Jerusalem in its leprosarium just outside the walls of the city, but it subsequently added a military role to its scope participating in several campaigns in the defence of the Holy Land including the Battle of Gaza in 1244 where contemporary texts state that “all the leper knights of the house of Saint Lazarus were killed.”

During the Crusader Period, from their humble origins, the leprosis Sancti Lazari slowly expanded their land holdings in the Outremer and in most of the European Christian countries including Southern Italy, Spain, Central Europe, France and England. This ensured that the Order had a modest economic base sufficient to maintain its activities in the Holy Land. The Order was forced to abandon its leprosarium in Jerusalem in 1191 after Salah al-Din besieged and captured the city. It established its new base in Acre. By 1256 the Order of Saint Lazarus had grown considerably and its existence under the Rule of St. Augustine was recognized by Pope Alexander IV. Knights of the Order participated in the defence of Acre in 1291 when the Saracen army under Sultan Khalid laid siege. The Lazarites fought bravely to maintain their stronghold but were overwhelmed by the Saracen onslaught. All the military brethren of the Order of Saint Lazarus present in Acre were killed during the defence of the city.