The central purpose of the Order of St Lazarus is and historically has been its strong dedication to charitable works. Members are required to donate both time and money to the Order’s work. Besides the annual oblation to the Member’s jurisdiction, additional costs can include charity projects nominated by the membership of local sub-jurisdictions, national dues assessed annually for the  central administration of the Order, and the optional cost of attending functions at local, national and international events. Additionally, there are one-time passage and insignia fees assessed for postulants being invested into the Order, and for Members achieving promotion.

100% of all charitable donations received by the Order goes to charity. Most of the Order’s administration is accomplished by its Members who volunteer their time and skills, and resources, all in the spirit of preserving the Order’s money for its charitable aims and obligations.  The Order’s clinics and hospitals and the charitable projects which it funds are open to all, without question or reservation, in the spirit of Christian charity. 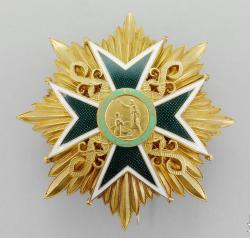 As a Military Order, Saint Lazarus has a structure of ranks that conforms with European chivalric custom, and decorations (medals) to recognise service or achievement. Promotions are won by achievement and require the approval of the Grand Master. This means that active, involved Members enjoy promotions up through the ranks, with the ultimate achievement of Knighthood or Damehood as an honour bestowed upon those who selflessly serve the Order. Besides promotions, members may also be decorated for achievement or merit.

There are non-Christians, especially those of the Jewish and Moslem faiths, who support the aims and good works of the Order. Such individuals may be granted Associate Membership and promotion through the ranks of merit.