On this the day of his funeral in Cape Town (3 January 2022), the Grand Bailiwick of the Order of St Lazarus in South Africa joins in the worldwide mourning for Archbishop Emeritus Desmond Tutu.

His death has been a profound loss for the world, his country, the Anglican Church of Southern Africa, and the Order of St Lazarus.

The Order is proud of its association with Archbishop Tutu who was invested with the Ecclesiastical Grand Cross Chaplain in 2008. 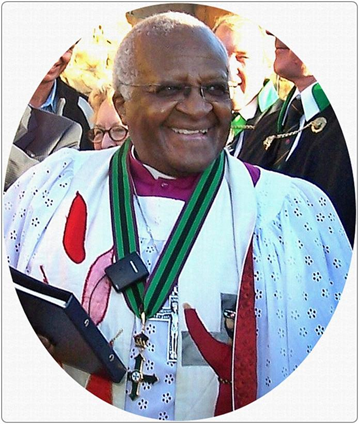 The Archbishop was undoubtedly one of the greatest sons of the South African soil. He worked tirelessly throughout his long and exceptionally distinguished career, to end the evils of Apartheid and inequality in South Africa, and to seek national reconciliation, and an honest accounting for the evils of the past. But more than this, he was an outspoken champion of human rights throughout the world, and a fearless opponent of all forms of oppression. He was forthright in his support for the full inclusion of women in the life and work of the Church, and he came out decisively in support of the LGBTQI community.

Famously he declared, "If you are neutral in situations of injustice, you have chosen the side of the oppressor."

We are both the richer for having lived alongside this great South African and the poorer for his loss.